Cumulative list of software updates and bugfixes in version 3

New features and software updates of version 3 as compared to version 2 are described at the bottom of this page.

The HTML export generates a html file allowing the file to be distributed via secure (SSL/TLS, “https”) connections.

Graphs saved as svg have now a transparent background.

HTML export generates integrated SVG graphics to replace the PNG graphics (lower overhead, and unlimited zooming without loss of resolution). In parallel, the JavaScript and CSS resources have been updated.

“Save Graph” can also save as SVG.

Bugfix: Arrow buttons “next” and “previous” diagram are now updated (bug introduced with 3.1.1214).

Reprogramming of BDD quantification: now included in the core code, no DLL’s needed.

Bugfix to ensure identical relative placement of elements irrespective of the scale of view.

Bugfixes and minor improvements: Sizing of the margins around the graph (to handle various “Snap grid” settings); Connecting elements (ensuring names and IDs of the automatically created conditions are unique and avoiding error messages when clicking outside elements); Centring the diagram on resizing of the diagram control.

Bug fix for connecting elements in “drop and drag” (bug introduced in version 3.1.1102).

Bug fix for vertical and horizontal sizing of text boxes below event tree branches (in the previous version the settings for barriers were used erroneously).

Two barriers can now be linked together directly in “drop and drag” (the intermediate condition is generated automatically and hidden). This allows easier construction of  “bow-tie” type diagrams.

Margins around graphs account for the text boxes below barriers and event tree branches.

No “alt” key for moving elements. Based on input from users, moving of elements in the graph no longer requires to press the “Alt” key. On selected elements, just hold the left mouse button to move (so first click + release to select, then press again to move). (But the old method with the “Alt” key still works).

Disable double-click to enter “edit”. Spurious activating the edit forms by double-clicks becomes even more annoying with the new method of moving. Therefore one can disable the that double-click will open the edit forms (Main Menu under “Options -> Preferences”. To open the Edit forms, use the “Edit Element” item in the right-mouse drop-down menu on selected elements.

New sections in the help file. Some explanatory sections have been added to the help file, viz. on quantification (calculation of probabilities) and printing (or the lack of printing options).

Flexible handling of “Critical Events”. Critical Events were only allowed inside the diagrams (not as initial event or as a consequence). This limitation has been removed, so the Critical Event can also be at the edges of the diagram. That allows the piece-wise development and presentation (e.g. separate graphs for the left-hand and the right-hand side of a bow-tie. It is ensured that if an event is selected as critical event in one diagram, the same event will become critical event in all the diagrams where that event appears.

Repair of the error version 3 that caused the program to fail when opening through clicking associated file types (*.sbmx) and when the user had downloaded custom terminologies. 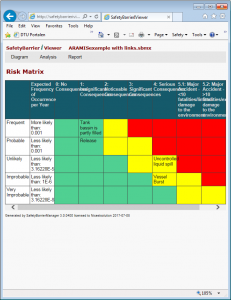 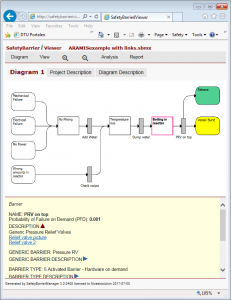 The results of SafetyBarrierManager can now be exported to an HTML file with image files to show and share the diagrams and all data tables using ordinary browsers. The files can be directly uploaded to an internet page (Nicestsolution offers pages under the safetybarrieriviewer.duijm.dk domain, see the pricelist and upgrade policy for details). The diagram has the same functionality as the SafetyBarrierManager windows app, so elements on the graph are clickable to display the underlying information in the panel below the diagram. The diagram can be zoomed and showed on full page.

One can switch between views with/without displaying probabilities, dependencies between barriers, and Risk Reducing Measures.

All tabular information from the SafetyBarrierManager windows app is available including risk matrix and analysis of Critical Events and Consequences. 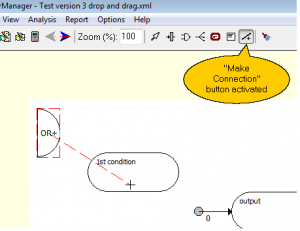 “Drag-and-Drop”, new toolbar to put elements on the diagram and to draw connections between them

It is now possible to draw barrier diagrams by drag-and-drop using new buttons in the toolbar. The diagram is now centred in the diagram display, so new elements (conditions, barriers, gates) can be placed all around the existing diagram. Especially the possibility to draw links between elements will be an enhancement as compared to the “old” way of selecting links to/from conditions via drop-down lists, especially for large projects with many conditions.

There are new possibilities for customizing the way event trees are displayed, so they look more like how other tools present event trees.